Day one at the RoboCup Venue

Today started off much the same as yesterday, with a breakfast full of Turkish cheeses and fresh bread; except this morning everyone was anxious to get the robots and tools packed up and hike over to the convention center. We braved the Turkish sun to arrive with smiles on our faces at the venue feelin pretty good.  JK could barely contain himself he was so excited. 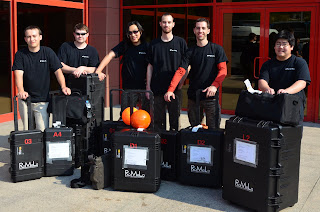 Hard not to feel like a boss when you're rollin in with this kinda gear
What you should all know is that Mike is pretty much the man.  He was up late last night preparing CHARLI's attack algorithm until Viktor convinced him to get some sleep.  Today he's been furiously coding the rest of the game play and battling with Color Lookup Tables.  These tables need to be precisely defined so that CHARLI can make out the ball, the field, and the goals.  Fortunately is is made easier with the help of a program from UPenn. 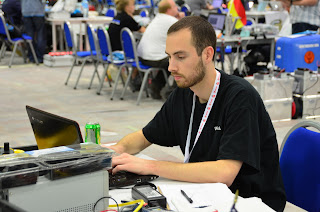 Mike's been in the groove all day.
Soon it was time for testing. We were all anxious to see how well CHARLI kicked.  The stronger kick he had, the better chance he has scoring a goal against his opponent. 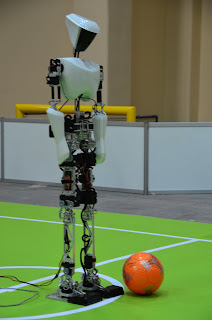 CHARLI anxiously awaits his shot at glory
All of JK's work the past year paid off.  CHARLI made his first practice goal from his own penalty line, over three quarters the entire length of the field.  The only trouble he might have now is not kicking too hard to avoid an offside penalty on his first kick of the match.  Then all of a sudden the first failure...CHARLI's head fell off. Fortunately it was fixed quickly: 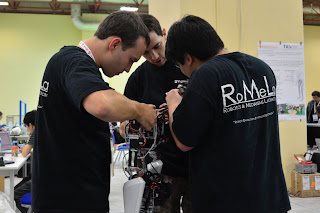 OH SNAP!  CHARLI's neck snaps during a practice run and he goes straight to the Robo-ER 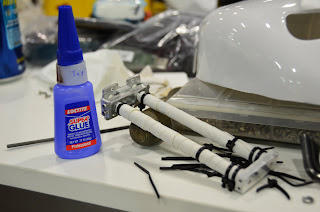 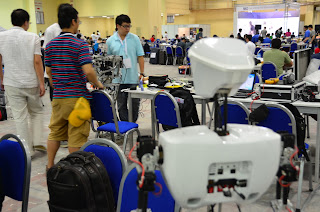 CHARLI eye's up the competition
Posted by nately at 5:51 AM