Another day another Dollar, or Lira rather.

Turkey has been treating us well so far. After yesterday finished off with a fairly convincing test of CHARLI’s game strategy, everyone got a good night's rest. We all knew CHARLI was working as well as we could hope for, Mike was getting the strategy nailed down, and the DARwIn's were cruising (literally, SJ has those little guys tuned to the "t". We're hoping they'll be the fastest guys on the field). 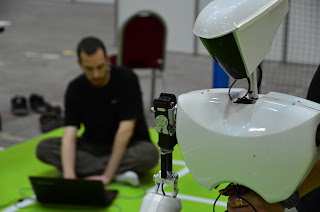 CHARLI listens closely for instructions
The kid size lineup has been set. DARwIn will play team UUVT and the Iranian team, AUTeam, tomorrow in the first round robin. The team got seeded within the top 4 because of the good finish we had last year, so we're pleased with the lineup.

The venue was hopping again this morning. Laptops and robots are everywhere. We started testing early. It was important to get the walking tuned up so we could get a good seed in the full size humanoid league. This year the seeding is dependent on how well your robot demonstrates walking. We were the first to qualify, but decided on using a tether, rather than an untested wireless connection, and therefore we may decide to requalify later for a better seed. 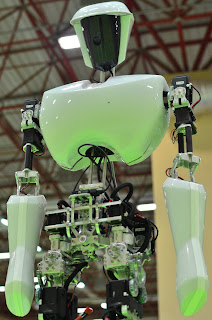 CHARLI is positively glowing after his qualification
Then, another hiccup. CHARLI's powerboard is behaving erratically. Its fluctuating between 16 and 13 volts. The Robotis motors like 15 volts, but fluctuations like this mess with the gains inside the motor causing CHARLI to limp. This concerns the whole team as our new robot, SAFFIR, uses the same MuRata DC to DC converters as CHARLI. Fortunately for RoboCup, JK packed 5 extra converters, so Bryce quickly solders some replacement components up. To be honest though, these hack fixes are always a little fun, it's about as pure engineering as you can get: problem, constraints, answer. All that's missing is quad-ruled paper. 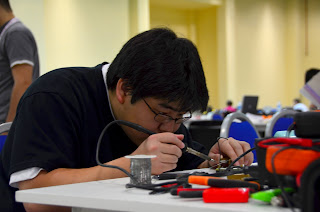 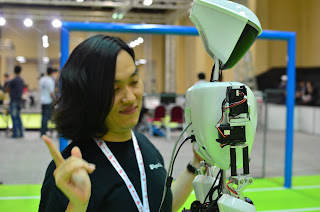